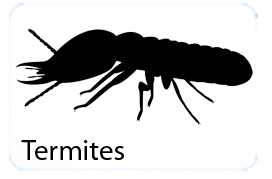 Termites have been around for over 120 million years. They are social insects and live in colonies which are usually located in the ground or in wood. Most termites feed on cellulose from wood and wood by-products such as paper; some tropical species feed on fungi, lichens, The most common of the subterranean termites are the eastern and western subterranean and the Formosan subterranean termites;
​
In 2005, the National Pest Management Association estimated that termites cause over $5 billion in damage each year. In addition, about $2.2 billion is spent each year on the control of termites (2006).